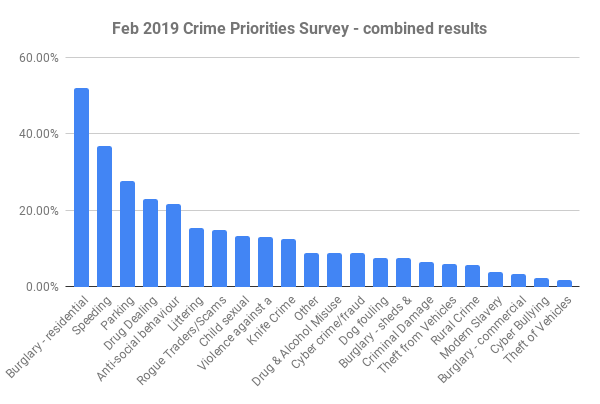 Our surveys have shown Residential Burglary to be consistently the major area of concern for residents, and again it was a clear number 1. Drug dealing and misuse remained prominent. Though recorded crime stats show that Chiltern’s incidence of drug crime is relatively low, there was a view that a number of other crimes stem from this cause. Ironically, the fact that Drugs has been neighbourhood policing priority for the last two quarters has meant that crime stats show a rising trend due to greater focus and enforcement.

Crime statistics also show that incidences of arrests for weapons possession are thankfully very low. PC Claire Annison gave an update on the work she has been doing as Schools & Youth Engagement Officer for Chiltern and South Bucks. This includes education on knives and drugs. In week commencing 11th March, Operation Sceptre will see Thames Valley-wide activity to help prevent and disrupt knife crime, as part of a national week of action. This will include knife surrender bins placed at 16 police stations. Look out for social media under the tags #KnivesRuinLives and #OpSceptre. The meeting felt comfortable therefore in replacing Knife Crime as a focus with Anti Social Behaviour (ASB).

The surveys showed clear concerns regarding ASB, particularly in certain localities. There is also evidence that incidences of ASB tend to be higher during longer daylight hours. Hence it was decided that ASB should become a priority for the coming quarter.

Part of the purpose of the Chiltern Community Forum is to help identify where the involvement of community and other agencies can complement the work of Thames Valley Police (TVP), which concerns should be addressed principally by policing, and which are being dealt with by different parts of the police force. The graph below tries to capture some of this information: 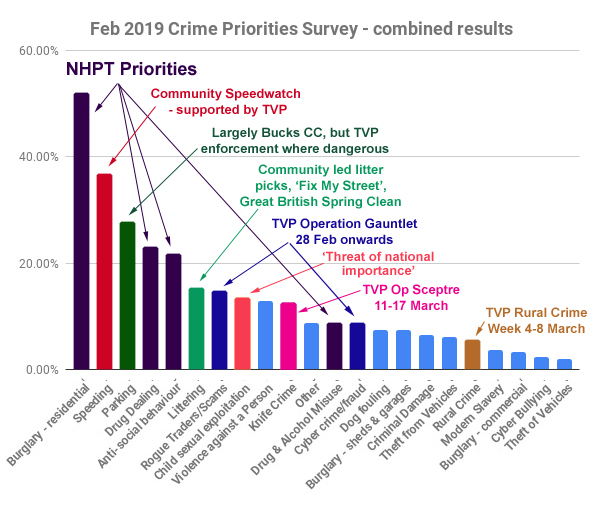 Speeding and Parking were areas of concern in all four Chiltern districts (Chesham, Amersham, Missendens and Chalfonts). Community Speedwatch efforts will be stepped up as daylight hours become longer, and receives support from the Neighbourhood Policing team in the setting up and training of the speed watches; and where and when able to do so subject to operational demands, the teams support the volunteers by attending with the Laser speed gun and issue tickets. Neighbourhood policing also supports local councils where Mobile Vehicle Activated Signs are installed and will conduct home visits for drivers in our area where significantly excessive speeds have been recorded.

Parking sits predominantly with the local authority, and we shall will pass on concerns to the relevant member at Buckinghamshire County Council. Subject to operational demands and in instances where a vehicle is parked in a dangerous position (such as on white zig zags near crossings), TVP will deal with drivers; in cases where the offence falls within the civil parking enforcement remit they will still speak to drivers and advise them to move which usually has the desired effect.

Bucks CC Parking Delivery Plan spells out Bucks CC’s vision for Parking, with specific actions for delivery, how it carries out civil enforcement, as well as aspirations for future parking management.

Rogue Traders and Scams made the ‘top 5’ in two districts. This is an area where greater enforcement will certainly be welcome, but also one in which education and knowledge can help residents to be safer, and help others. There are a number of initiatives available. In particular we would draw attention to the upcoming Operation Gauntlet, an anti-scam campaign involving TVP, Trading Standards and Chiltern & South Bucks Community Safety team. This launches on Monday 25th February. Two meetings will be held on 5th March, advising on current scams and how to avoid becoming a victim. Venue is the Council Chamber, Chiltern District Council, King George V Road, Amersham HP6 5AW. There is a choice of times: 4-5.30pm, or 7-8.30pm.

We shall flag up other events as we learn of them.

Littering was in the top 3 priorities in Chesham and the Missendens. Comments showed that whilst there was some concern about general littering, eg rubbish being thrown from car windows, there is a particular concern over fly tipping. Bucks County Council’s web page ‘Fix My Street‘ is where you can report a problem on a street or road in Buckinghamshire, and track the progress of reported issues. This includes not only fly tipping but also potholes, another major bugbear of residents. So far as more general littering is concerned, why not support one of the litter picks which are occuring in the coming weeks, as spring arrives? If you want to organise your own, then the Community Safety Team at Chiltern & South Bucks can help you organise a community litter pick. Or you can register to join or host a clean-up in Keep Britain Tidy’s Great British Spring Clean which runs from 23rd March to 23rd April.