For the first time in two years of Chiltern Community Forum setting Neighbourhood Policing priorities, residents at the November 2019 meeting set ‘Violence against a Person’ as one of the quarterly priorities. 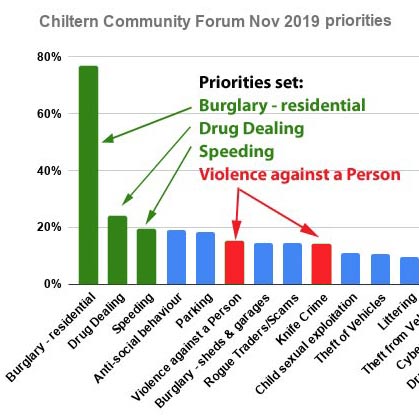 In this context, we are happy to report on a letter distributed to the meeting, from Inspector James Ellis of the Safeguarding & Problem-Solving Team, based in Amersham.

The letter informed members of Community Forums how it is planned to spend Chiltern & South Bucks’s allocation of funds received from the Home Office for tackling Serious Violence. It also invites comment and feedback on this information.

As background, in August 2019, the Home Office announced a spending package of £34.76m for 18 Police & Crime Commissioners to set up specialist Violence Reduction Units to tackle violent crime in their area. Thames Valley’s share was announced as £1.16m.

This spending will dovetail with initiatives being funded already by the award, in 2018, to the Office of the Police and Crime Commissioner for Thames Valley of £822,000 from the Home Office Early Intervention Youth Fund.

The letter goes on to explain that Area Commander Superintendent Amy Clements has decided to focus on protective and preventative measures, diverting likely offenders; this may also have relevance to other Force priorities, such as County Lines and Child Criminal Exploitation. Key elements of the plan include:

The portion of funding directly applicable to Chiltern & South Bucks is £63,683. You can download a PDF of the full letter here.

What do YOU think?

Inspector Ellis is keen to hear local opinions on this local spending initiative. The letter concludes: “Any opinions on the appropriateness of this proposed spend, or alternative suggestions, can be directed to me via email: james.ellis@thamesvalley.pnn.police.uk.”