Two of the previous priorities – Residential Burglary and Drug Dealing and Misuse – were retained, and Speeding replaced Rogue Traders.

This was in response to the pre-meeting survey that showed Speeding to be the leading concern of respondents. The numbers were backed up also by comments which suggest that residents of Chiltern are fed up with antisocial, speeding motorists. This was the first time in a year and a half of surveys that Residential Burglary had been displaced as the leading concern. 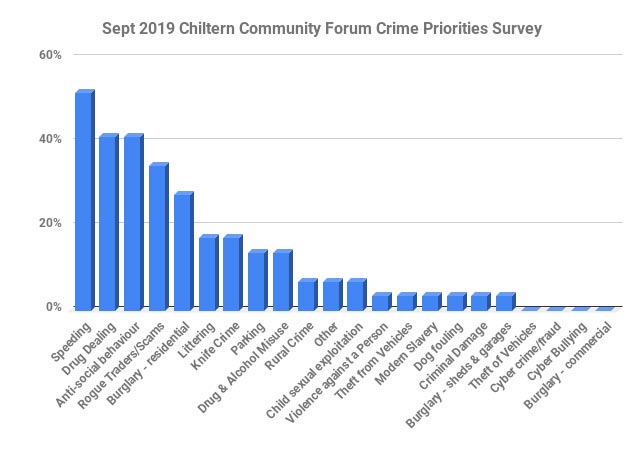 It should be said that the response rate to the survey this quarter was abnormally low. Whilst understanding the phenomenon of ‘survey fatigue’, we do urge residents to participate in future surveys, to help ensure that decisions on policing are based on a representative view of the Community’s wishes. Conversely, the meeting was well attended, and much useful conversation took place. 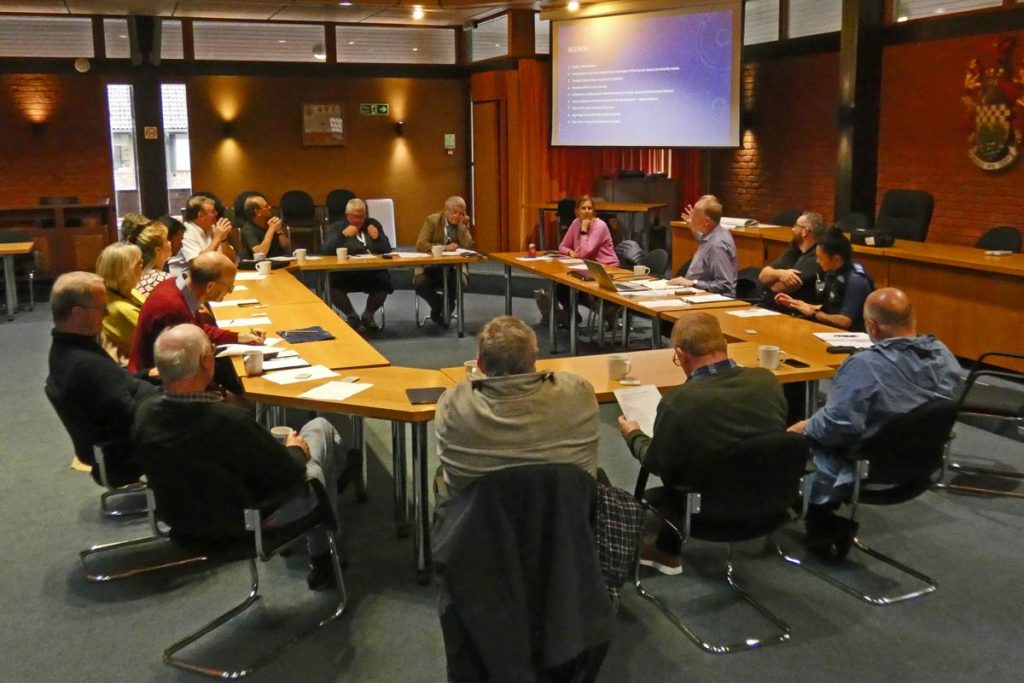 Despite the strong showing in the survey, voting Speeding as a top 3 Neighbourhood Policing priority wasn’t without discussion. The first two meetings of the Forum, in 2018, had set Speeding as a priority, but more recently, it had been assumed to be more a matter for Roads Policing. The question was raised at the meeting whether aspects of Speeding overlap with Anti Social Behaviour, and this may partly have influenced the decision.

Our neighbourhood teams are relatively small, and there are obvious issues of resourcing and logistics as regards policing speeding at a neighbourhood level. This is true also at the Thames Valley Roads Policing level. Residents in every one of the Chiltern areas can point to a street or highway on which they believe there is a problem.

Initiatives will include ‘detect and deter’ operations, with PCSOs deploying speed indicators and mobile ANPR. We have heard also that Chiltern will be trialling mobile ANPR in shift cars for Thames Valley Police.

Community Speedwatch remains an essential part of Community involvement in trying to deter speeding; Neighbourhood Policing will support Speedwatch groups, but appeal that they should notify police WELL IN ADVANCE of planned times and locations.

DID YOU KNOW? As a member of the public, if you see dangerous driving, YOU can report it. You can either call 101, or you can contact DVLA on 0844 453 0118. (“Anonymously Reporting Dangerous Driving to the DVLA“)

We are told also that the priorities of Speeding and Burglary can work effectively alongside each other. Policing potential Burglary hotspots involves partly disruption of potential offenders through other aspects of policing. The Neighbourhood Police Team has been involved in a number of cross border operations with other forces targeting criminals travelling into our area. The minutes for this meeting list ‘Operation Greenbelt’ and ‘Operation Groundhog’ under the Burglary priority, yet the results of both list mainly vehicle crimes. Similarly, the ongoing ‘Operation Glare’ combines speeding enforcement with policing of such hotspots.

Drug dealing and Misuse remained a leading concern. Though recorded crime stats show that Chiltern’s incidence of drug crime is relatively low, there is a view that a number of other crimes stem from this cause, and active policing of drugs can have a positive impact on policing of other crime types. Ironically, the fact that Drugs has been a neighbourhood policing priority for the last three quarters has meant that crime stats show a rising trend due to greater focus and enforcement. More details can be read in the Minutes and in recent Neighbourhood Policing newsletters.

Rogue Traders and Scams was dropped from the top 3 priorities, but this does not mean that it will be ignored. Education and knowledge is essential to help residents to be safe from fraud and rogue traders, and to help others. ‘Operation Gauntlet’, an ongoing anti-scam campaign involving TVP, Trading Standards, Chiltern & South Bucks Community Safety team and NatWest, is returning with a new programme which we understand will focus in particular on cyber and digital fraud.

During the previous quarter, the Neighbourhood Policing team had been raising awareness of doorstep selling, and working with Trading Standards and Chiltern & South Bucks District Council in creating no doorstep selling zones. 22 roads have signed up to the scheme.

The minutes cite an example of the successful use of the Banking Protocol. This enables bank branch staff to contact police if they suspect a customer is in the process of being scammed, with an immediate priority response to the branch.

Concerns over Knife Crime were discussed during the meeting. Though numbers of offences causing harm remain thankfully low, there had been a 24% year-on-year increase in recorded incidents of knife crime, to 57. These ranged from incidences of stabbing, to people stopped with knives, where no physical harm had been done. Almost half had been successfully detected.

The week following the meeting was ‘National Knife Crime Awareness Week’. During that time Thames Valley Police, along with other forces, revived ‘Operation Sceptre’, taking part in a variety of activities designed to challenge and reduce the threat of knife crime. These included:

Whilst there can be no complacency on Knife Crime, we are encouraged by the ongoing work in schools and among young people, led by PC Claire Annison, Schools & Youth Engagement Officer for Chiltern & South Bucks. This is supported by deployment of ‘knife arches’ in some schools, and hand-held metal scanners assisted by funding by Forum Partner Chiltern & S Bucks Community Safety Partnership. Further ongoing initiatives have been enabled by the award of £822,000 to the Office of the Police and Crime Commissioner (OPCC) for Thames Valley from the Home Office’s Early Intervention Youth Fund (EIYF). This is being used to deliver a programme of activities in partnership with organisations across Thames Valley to jointly tackle youth violence, vulnerability and exploitation in our communities.

The meeting featured a discussion on parking and traffic issues around local schools, at dropping off and picking up times. This had been prompted by concerns around one particular school, but it was recognised that this is a common problem at many schools. Chairman Andy Garnett volunteered to research a joint approach regarding traffic and parking around schools

Have your say on Victim Services

Survey for victims, and professionals who work with victims, on design of future support services in the Thames Valley.    Read More...

Road Safety Summit announced by PCC is to be welcomed if it helps address behaviours which make speeding and anti social driving leading concerns of local residents.    Read More...

Information on joining the NEW Chiltern Rural Community WhatsApp Group. Administered by the public, with direct engagement with the Neighbourhood Policing team, it will be a tool to share information with community and Police    Read More...

Following a change in legislation, Buckinghamshire Council plans to apply for powers to monitor and enforce moving traffic contraventions. It is seeking residents’ opinions in a consultation closing on 4th April.    Read More...