Our surveys have shown Residential Burglary to be consistently the major area of concern for residents, and again it was a clear number 1. Speeding and Parking also remain very prominent concerns; speeding was in the top 2 in all four areas, and it is clear that the residents of Chiltern are fed up with speeding. 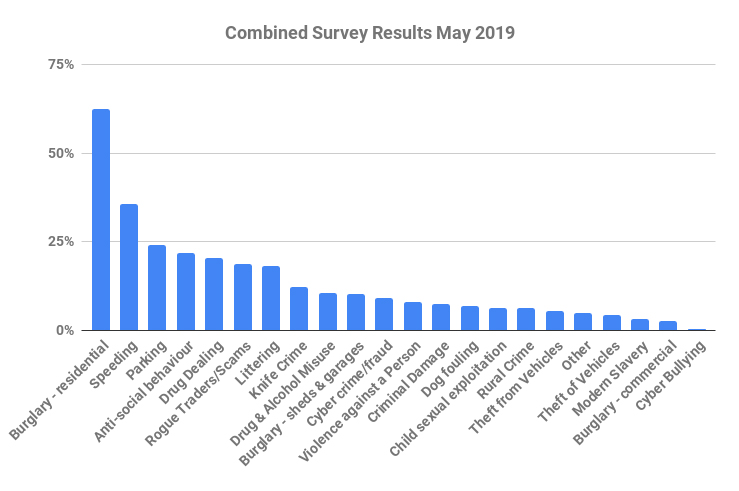 Drug dealing and misuse remained prominent. Though recorded crime stats show that Chiltern’s incidence of drug crime is relatively low, there is a view that a number of other crimes stem from this cause, and Inspector Vine reported to the meeting that active policing of drugs has had a positive impact on policing of other crime types. Ironically, the fact that Drugs has been a neighbourhood policing priority for the last two quarters has meant that crime stats show a rising trend due to greater focus and enforcement.

Rogue Traders and Scams is an area where greater enforcement will certainly be welcome, but also one in which education and knowledge is essential to help residents to be safer, and to help others. Operation Gauntlet is an ongoing anti-scam campaign involving TVP, Trading Standards and Chiltern & South Bucks Community Safety team. Dates of upcoming events can be found on our Diary Dates page. We anticipate that neighbourhood policing teams will also look to encourage greater adoption of ‘no cold calling zones’, alongside Neighbourhood Watch, Trading Standards and other agencies.

Part of the purpose of the Chiltern Community Forum is to help identify where the involvement of community and other agencies can complement the work of Thames Valley Police (TVP), which concerns should be addressed principally by policing, and which are being dealt with by different parts of the police force. The graph below tries to capture some of this information: 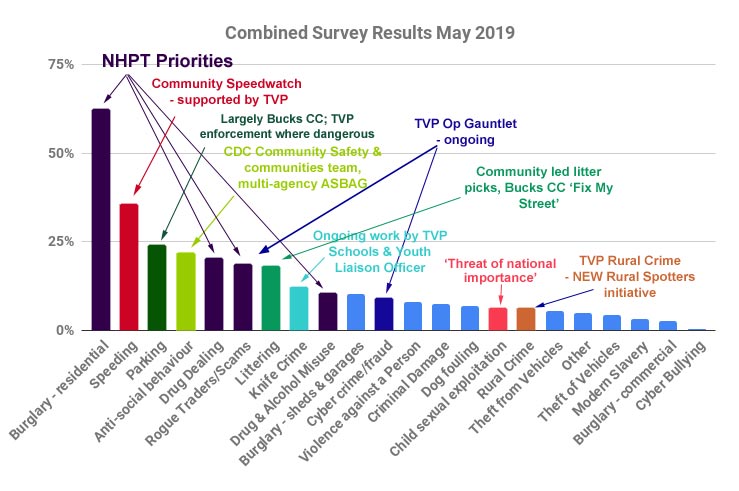 ASB, though dropped as a ‘top 3’ priority, remains a widespread concern of residents, particularly in certain localities. There is also evidence that incidences of ASB tend to be higher during longer daylight hours. Neighbourhood police teams are well aware of the need to be on the lookout. Good work is always being done by the Chiltern & South Bucks Community Safety and Communities team to support activities, especially during summer holidays. And a multi-agency ‘ASBAG’ chaired by Community Safety, seeks to address cases of ASB that require a multi-agency approach.

Speeding and Parking remain high areas of concern. Community Speedwatch efforts will be stepped up as daylight hours become longer, and receives support from the Neighbourhood Policing team in the setting up and training of the speed watches; and where and when able to do so subject to operational demands, the teams support the volunteers by attending with the Laser speed gun and issue tickets. Neighbourhood policing also supports local councils where Mobile Vehicle Activated Signs are installed and will conduct home visits for drivers in our area where significantly excessive speeds have been recorded.

Parking sits predominantly with the local authority, and we shall pass on concerns to the relevant member at Buckinghamshire County Council. Local Area Forums (LAFs) are also provide an effective platform for concerns to be aired to Bucks CC representatives. Subject to operational demands and in instances where a vehicle is parked in a dangerous position (such as on white zig zags near crossings), TVP will deal with drivers; in cases where the offence falls within the civil parking enforcement remit they will still speak to drivers and advise them to move which usually has the desired effect.

Bucks CC Parking Delivery Plan spells out Bucks CC’s vision for Parking, with specific actions for delivery, how it carries out civil enforcement, as well as aspirations for future parking management.

Comments on Littering showed that whilst there was some concern about general littering, eg rubbish being thrown from car windows, there is a particular concern over fly tipping. Bucks County Council’s web page ‘Fix My Street‘ is where you can report a problem on a street or road in Buckinghamshire, and track the progress of reported issues. This includes not only fly tipping but also potholes, another major bugbear of residents. So far as more general littering is concerned, why not support one of the litter picks which are advertised regularly by Parish Councils and local groups? If you want to organise your own, then the Community Safety Team at Chiltern & South Bucks can help you organise a community litter pick.

Rural Crime did not feature highly in the survey results, but is a recognised problem and a target of the Thames Valley Police and Crime Commissioner. A new initiative of ‘Rural Spotters’, encouraging extra vigilance by horse riders, will be launched by TVP in June.

Among other issues raised at the meeting was concern that a large proportion of defibrillators across Chiltern have not been registered with the ambulance service, making them ineffective in cases of emergency, and concerns about the effectiveness and cost of 101 phone calls.

A call to register defibrillators will be included in the next Community Safety newsletter, we have published a news item explaining how defibrillators can be registered. Only days after the meeting, Home Secretary Sajid Javid announced that the 101 service would become free from April 2020 – though we hesitate to take credit for that change!

Minutes of the meeting will be uploaded as soon as available.

The Knife Angel spent a month at Arbour Park, Slough. We hope that its inspiring and thought provoking message has an abiding effect.     Read More...

Opportunity for Residents to call for more Community Policing Funding

Are you one of many residents who say we need more policing resource at a local/community level? If so, please take the opportunity to say so!    Read More...

We encourage residents to contribute their views to Thames Valley PCC Matthew Barber’s consultation on crime and the policing budget for 2023/24.    Read More...

Neighbourhood Police INspector and colleagues will speak to residents about concerns of an increase in burglaries via a Microsoft Teams meeting, 7pm Thursday 1st December.    Read More...