We were very pleased to welcome Deputy Police and Crime Commissioner Matthew Barber as a guest. He stressed the importance of Neighbourhood Police within Thames Valley Police (TVP), and of continued investment in Neighbourhood Policing. In particular he stressed how impressed he personally has been with their local knowledge. He cited an example of a major crime in which Neighbourhood Police officers had been first on the scene, and in gathering evidence. In contrast, he pointed out that certain Forces have deemphasised Neighbourhood Police teams, moving resource to response teams.

Regarding Speeding, Mr Barber stated that concerns in our locality have reached his mailbag, and touched on various initiatives at a county, Force and national level. He did express a view that Community Speedwatch (CSW) needs reinvigorating in Thames Valley. It is our own observation that knowledge about the policing of Speeding, CSW, the use of data etc appears very fragmented. It is good news that PC Lee Turnham is now the Force lead on Community Speedwatch, and is based at Amersham Police Station. The Forum hopes that it may be able to help in enhancing understanding of the issues surrounding Speeding and its policing.

Inspector Richard Vine reported on the past priorities for Chiltern LPA’s Neighbourhood Policing team. A wide-ranging discussion ensued with participants. These will be reflected in minutes of the meeting, which we shall post when they are ready.

Priorities for the coming period were discussed and decided. One of the features of the September survey was the greater concentration of votes on the top 3 concerns: Residential Burglary, Speeding and Anti-Social Behaviour had all gained in share of the vote. Of the other concerns, only Parking increased its share against May, driven by some specific local concerns. We were very pleased to receive more votes from under-18s than in recent surveys, which tended to support the same major concerns.

Taking this into consideration, priorities were assigned as Residential Burglary, Speeding and Anti-Social Behaviour.

Thank you to all residents who contributed to a strong survey. Below are the top 5 concerns expressed in each of the areas of Chiltern LPA, and the full data in graphical form (click any graph to open slideshow view). 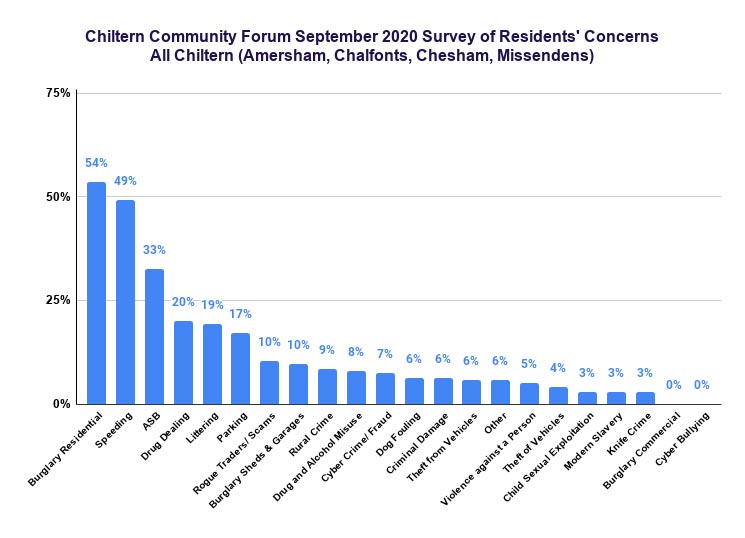 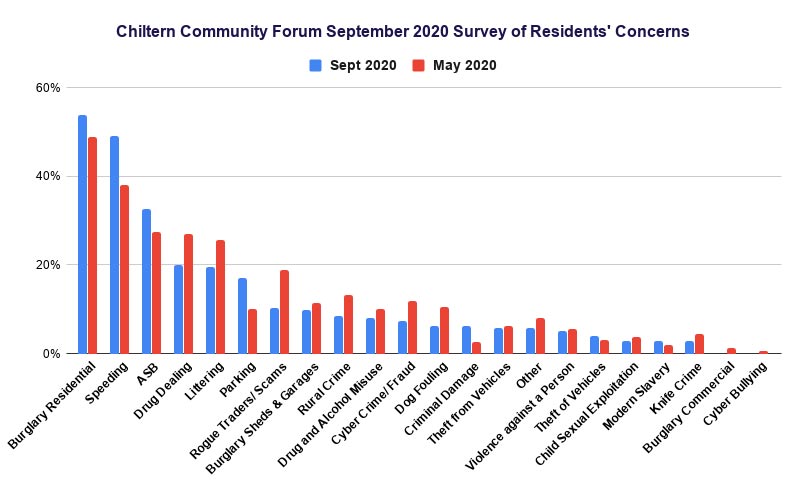 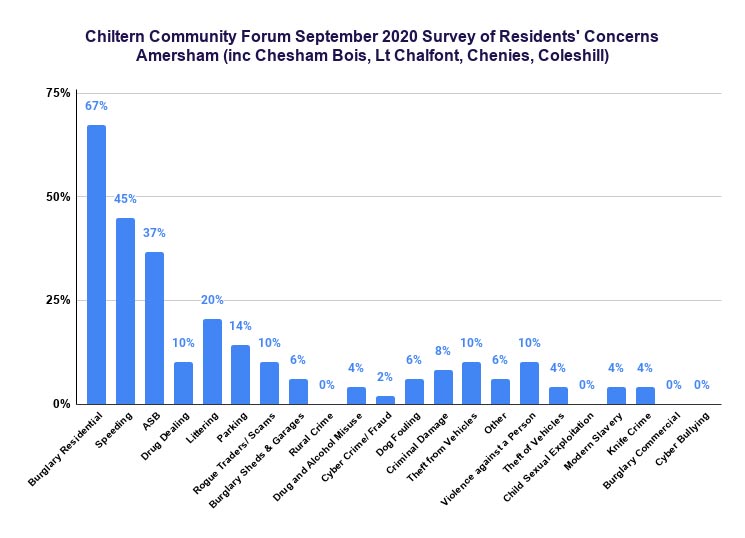 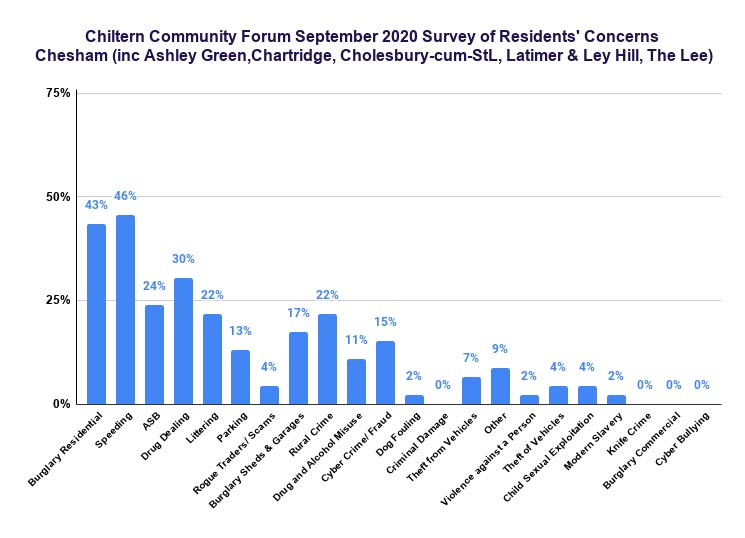 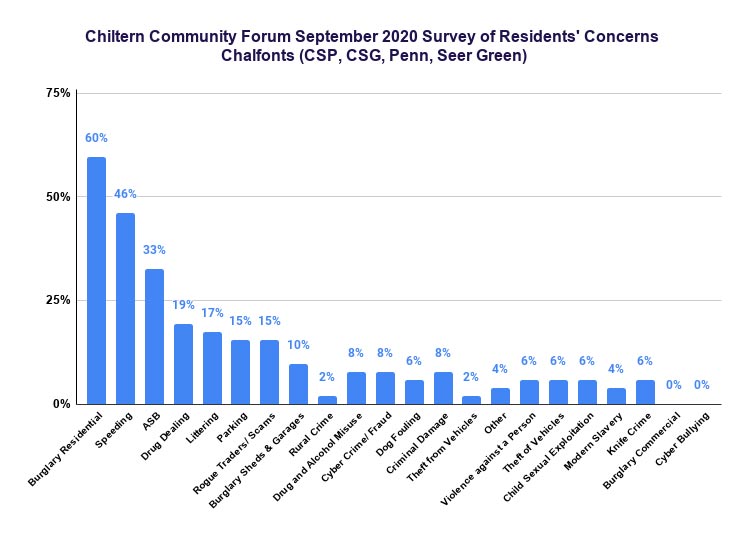 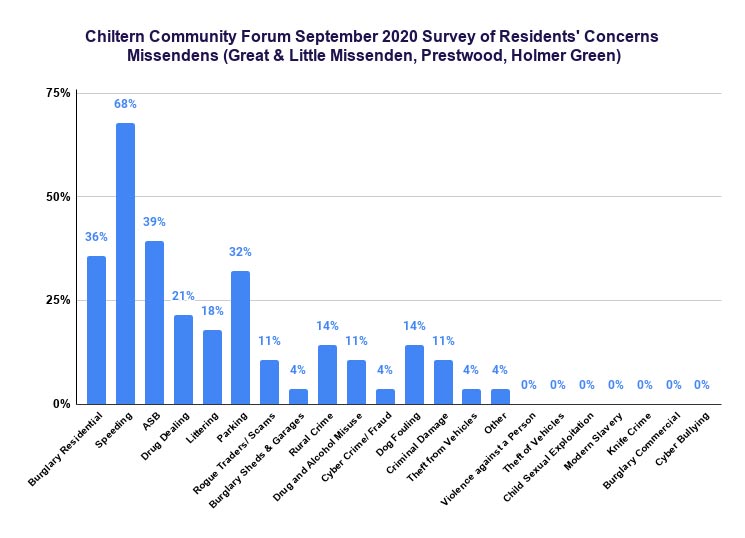 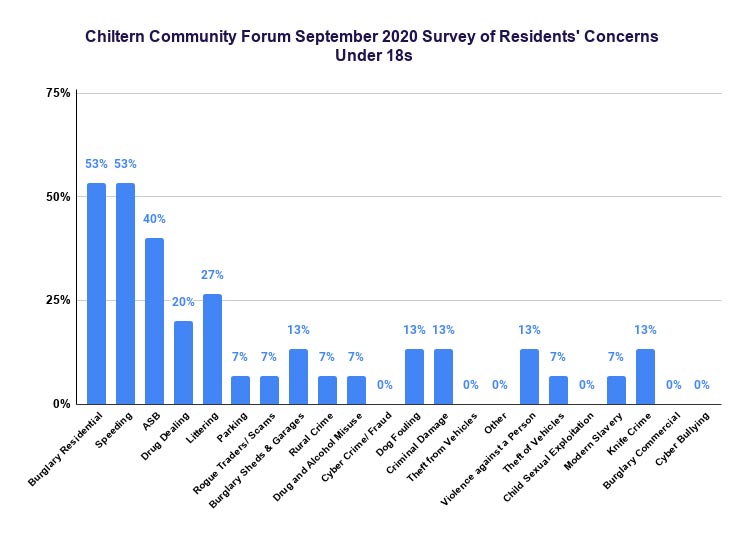 You may also find the following helpful:

Our Crime Stats page, with trends up to the end of July.

The most recent Neighbourhood Policing newsletters for Chesham and Amersham, Chalfonts and Missendens.